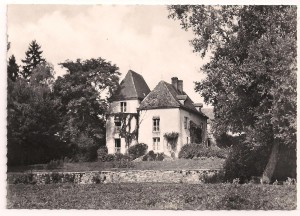 In our family summer home in Burgundy, there was a photograph of Marshal Pétain on the piano. I never questioned it. All I knew was that my grand-father had been Pétain’s Chief of Protocol, and that he admired and supported him. After my grand-father died, the photo disappeared. I was fourteen years old, and I barely noticed it.

My parents and grand-parents have always readily talked about the war and the years of occupation.

“We were cold, we were hungry,” they would say.

That was a never ending theme—the food—where to find it, what they ate, how they survived. It was never enough, it was dismal. My Mom, then a young mother of two, had to go to various farms so she could feed her family. That meant she would often ride for up to 50 miles on her bicycle, in the hilly Burgundy countryside. Sometimes the farmers had a few eggs and some milk, at an exorbitant price, sometimes she came back with nothing. They would sit around the kitchen table, munching on the infamous rutabagas and they tortured each other with vivid dreams of juicy roast beef, fresh greens and apple pies. I heard those stories over and over. They laughed about it.

But one day, one story struck me. There was nothing light-hearted about that one.

My grand-mother said, “The communist resistants painted a swastika on the walls of the house and took your grand-father into the woods to shoot him dead. At the last minute, they decided otherwise and told him to get out of their sight.”

“Why?” I asked. I couldn’t imagine why anyone would want to hurt this gentle, dignified, wonderful man. A swastika? My grand-father hated the Nazis. I remembered him saying with a shudder, “They wanted us to become like them.” So why?

The subject seemed to elicit tangible silences and imperceptibly pinched lips. When I did get some answers, they were always partial or unsatisfactory. Here was, I felt, information I was denied access to.

“The communists hated your grand-father, because he was an aristocrat.”

Or, “The neighbor led them. Before the war, your grand-father didn’t hire him, and he resented it.”

“They didn’t want to kill him for that, did they?”

“This kind of thing happened all the time—settling personal scores.”

I insisted. I asked my father. Why? Really?  “Because your grand-father was in the Vichy government,” he said.

I couldn’t understand why this would be a reason for cold-blooded execution, or what “the Vichy government” really meant for that matter.

Today, it seems unbelievable that no one would discuss this at the family table, ask hard questions. Nobody ever talked about it, really.

The closest thing I can think of was my mother saying, several times, “When we learned of the concentration camps and the gas chambers after the war, we were horrified. We had no idea.”

I also remember her anger and outrage in the ’70s when one of her friends, influenced by her new boy-friend, said the Holocaust was a hoax. My mother never spoke to her again.

But further questions about Vichy were met with a stern, “It was the only legitimate government we had and someone had to hold the fort, so Pétain volunteered even though he was old and tired and the Germans were giving him a hard time.” This was delivered in such a peremptory manner that I sensed it was not open to discussion.

My aunt said, “The post-war ‘purge’ didn’t affect your grand-father; he wasn’t involved in any political affairs.”

Somehow, I guessed there had been some mysterious wounds, and that they were still fresh. I dared not reopen them.

Besides, when my family did discuss politics, the main topic being the Algerian war, they always disagreed and argued, and it was incomprehensible to me anyway. So I soon gave up asking.

I was a giddy teenager and having way too much fun to worry about something that happened before I was born. You might as well talk about Louis XIV, or the cavemen, for that matter.

But for them, it was yesterday—as close as an indigestible dinner.

As I grew up and tried to learn more about the controversy surrounding Vichy, bare facts often eluded me; more than one generation later, passions still ran high, outrage and animosity precluded all debate. So I just pushed it further to the back of my mind. Of course, it was all the more there, nagging at me, getting louder and louder. Yet, I wouldn’t look at it. I was too busy living my own life, observing my own times.

I wrote articles, short stories and novels with more on the backburner, all on entirely different subjects.

My grandmother died, then my father. More recently, my mother, suffering from dementia, didn’t know who she was anymore.

And now that it was too late, it mattered. Now I wanted to know.

How many people make that mistake? Your parents held treasures, witnessed history, you didn’t ask them about it and then it’s gone forever.

I grappled with this for years. What really happened in France during that period? Was Vichy the nest of vipers everyone seemed to say it had been? Who was really Pétain? Did anyone in Vichy know what happened to the Jews when they were taken away? Who sent them to their death?

I read, I listened, I looked, I interviewed some people, I assembled what bits and scraps I could remember hearing. I started to get a clearer picture. But I remained cautious, weary of partisan reports; the black and white assumptions; ones that suited their author’s political agenda; the heroism versus barbarism hypothesis; the loathsome, Nazi-loving, Jew-hating, fascist, Vichy collaborators on one side and the intrepid, self-sacrificing, noble, pure-hearted members of the Resistance on the other; Pétain the traitor and De Gaulle the savior.

Although I acknowledged the Vichy government’s unforgivable compromises and deadly policies, I knew it wasn’t that simple. That makes for good movies but bad history. And history, of course, is never an absolute truth.

I did, however, find many historians, writers and film-makers who strove to give an unbiased account. And some evidence was inescapable. Horrendous abuse and brutality had been perpetrated by both sides, including the winning side, by fanatics and shady individuals. But one tends to brush off what doesn’t look good in hindsight, it’s human.

So I was finally able to draw my own conclusions, to the best of my abilities.

A friend of my parents, now 93 years old, recently remembered that as the war ended, many saw the wind turn and quickly scuttled out of Vichy, joining the resistance in the last days of the war. Later, many of them claimed they had been Heroes of the Resistance, without having lifted a finger. But all those who remained, like my grand father, or had been linked, one way or the other, to Vichy, were investigated and tried. Some were executed, with or without a trial, some imprisoned, some ostracized. Some were cleared.

But there were still questions I could never answer: How much did my grand-father know? What were his ideas at the time? What did he do or not do? What did he condone? How far did he go down the slippery slope? Did he agree with the creation of the Militia? Did he ever have doubts? And how about my grand-mother, and my parents? How could I penetrate this secret? Was it even a secret if they were unaware? Or had they chosen to be oblivious? And finally, what would I have done in the same circumstances?

My only solution was to start from scratch. Recreate my family; reinvent it; put myself in their shoes and go back to that period, relive their life at the time; explore the shades of grey; get my hands dirty.

I started to write.

As I’m researching further, I’m discovering events of the war and the occupation as they unraveled, and little by little, I’m evolving with them. I’m living it like everyone lives life, and history: with only part of the whole picture. An imperfect and incomplete view that is shaped by who’s looking at it, anyway.

The characters in my novel have now taken on a life of their own. As I’m following their path and their thoughts, day by day, they resemble less and less my own family members, even though there is a deep, underlying thread that always stays attached to them. These are living, breathing individuals in their own right. Like each and every one of us, they struggle with their inner contradictions, their decisions are made in the here and now and they cope the best they can with the extraordinary challenges life, and war, throws at them.

I’m not trying to guess anymore. All I needed to do was face what needed to be faced and move on. I’m not taking sides; I just listen, and understand.

2 Responses to The Novel