My parents were to get married in our family home in Burgundy. I have a copy of the wedding invitation. The date is September 3, 1939—the day Britain and France declared war on Germany.

Needless to say, they did not get married that day. My father had been mobilized a while earlier and was in a naval base stationed in Cherbourg. My mother and her family were in Burgundy.

They got married in Cherbourg a month later, on a cold, rainy October day. The grand wedding they had planned in the countryside had shrunk to just a few close members of the family in a darkened church. A small town on the coast of Normandy, Cherbourg had suddenly been swarmed by men arriving to join the Navy or their army unit. The only partying going on was soldiers getting drunk to forget about the looming threat of battle.

This summer I went home to Burgundy, and searching through family papers, I found several letters written in 1939. They were bundled together in a large, 1940s steamer-trunk my parents used when sailing from the USA back to France in 1949. The trunk was full of old documents and letters, and I thought I knew them all; I did not.

One of them, a treasure and a historical document, was waiting for the right time to be discovered. It was a letter my father wrote to my mother on September 3, 1939, from Cherbourg.

He’s a bit solemn, but then, one can hardly fault him given the circumstances; Yet I found him almost boyish in his naivete; it was like discovering a young father I never knew, and I felt deeply moved.

I’m not sure what he’s talking about when he mentions Germany’s misery and the USSR’s cunning. No doubt he’s referring to the Nazi-Soviet Pact, signed in August of 1939; and he obviously bought the propaganda in the French media which claimed our forces were superior to theirs, that the borders were impregnable, and that the Germans were all living in extreme poverty and starving. The arrival of well-fed, well equipped, impeccably trained, athletic young soldiers and fast, light, modern tanks took everyone by surprise. They crossed the border like a knife through butter, the French army was slaughtered and the war was lost with lightning speed.

What touches me most is how full of hope—and illusions—he was, but at the same time, how he wanted to get married as soon as possible; which meant that, in spite of all his reassuring words to my mother, he still thought he could get killed.

But I’ll let him talk.

My darling, my little one, my great wife,

This time, this is it. I predicted it, only too well, last night. But we mustn’t lose hope. Not yet. First of all, the hostilities could end rapidly. If you think about it, we are not confronted face to face yet. And frankly, I don’t quite see what we would do, what they would do. The borders are so solidly established it seems impossible to cross them, on either side. 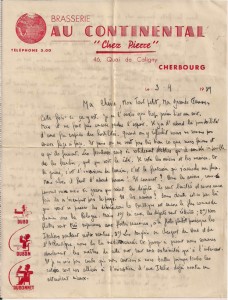 That leaves the planes and the ships. But war is invasion by land, the foot soldier who doesn’t budge. First they’d have to get through! And how would they do this? The planes can come, but even if the damages they inflict can be great, these are still limited, as the enemy is not occupying the country.

How about the ships? It may well be how it will start. The Baltic is the easiest way to reach Poland but 1) there again, damages will be limited, 2) our fleet is greatly superior to the enemies’ fleets, or rather, fleet, since Italy seems to remain neutral 3) the English are in charge of the North and the Atlantic, we of the Mediterranean. So far, we’ve been the absolute masters of this sea, both in its far reaches and in our territorial waters. I don’t see whom we would fight since all the coasts belong to our allies except Italy, which is staying neutral, waiting for better days. Therefore we can be pretty sure the French fleet won’t have to fight in the coming days. And 4) I’m still in the meteorology office and working as much as I can so they keep me there.

You see then that the danger is not terrible yet, at least not for me. For the rest, I’m entrusting my soul and our love to God.

I’m deeply saddened when I think of all the unfortunate victims of this war, but I’m convinced that materially, it’s virtually impossible for it to continue and it will soon die down. May God confirm my optimism.

Another possibility is that Hitler, faced with his failure, or simply our resistance and the slow progress of operations, will throw in the towel. Maybe he’ll have a final glimmer of reason.

And last but not least, Germany’s poverty and a revolution. Poverty if the USSR doesn’t do anymore than it’s doing now, and revolution against its horrendous regime; a revolution the USSR, in its infinite cunning, might provoke itself in its allies’ soil since its goal, ultimately, is to spread its red plague.

All things considered, after all the anguish of the past few days, I feel extremely positive, and for very good reasons.

Still, I renew my urgent appeal. As soon as transportation is reorganized, please come, by whatever means you can, while it’s still possible and I’m still here. Best would be to travel by car during the daytime, in short stages, if your car is not requisitioned. Otherwise, wait a few days until the trains work again. Telegraphs are still functioning. If you present your diplomatic passport, you could easily send me a telegram just before you leave. Cherbourg is packed and I will need to book rooms for you, your mother and whoever might drive the car.

There was no mail yesterday or today, maybe not tomorrow either. No news from my parents. I took care of the Church and the Town Hall. If you bring your birth and baptism certificates, with the authorizations from your parents, I can easily obtain an exemption for mine. I have the marriage contract here.

In any case, whatever happens, stay calm. We still have a chance to come out of this safe and sound. Let’s not jeopardize it.

All of Cherbourg is in the dark. Every time someone opens the door of the cafe, we have to turn all the lights off. Do not be surprised if my pen skids a bit. At the hotel, the bulbs are blue and you can’t see a thing.

I just have time to shout out my love for you, and my hope.

I love you. See you soon.